One of these days I will have to start switching to portable satellite operations due to loss of horizon at my place of residence. In 2019 I found a project (intro) on the SARCNET website and decided to build it (pdf) as I have very little experience with mechanical constructions. There were no big problems in getting the hardware working, but I never got the MEMS sensors to work properly and so after a year and a half I decided to abandon this design and go for stepper motors instead after seeing the example from this project. Since I already had invested a lot in materials I decided to (re)use them as much as possible. This came down to the enclosure, the aluminium rods, bearings and sprockets.

I had no template to work with, so I basically had to figure out everything myself. I wrote some basic code to control a stepper with switches and implemented an end-stop switch (photo optical sensor). After that I replaced the DC motors with steppers and found that the TB6600 drivers I was using were too noisy. I replaced them with better ones (see comments below) and build a controller setup with an Arduino Nano on a perf board. After that it was simply building a custom case (stomp box style) and putting everything together.

The code works, but is not the best in the world, especially when you activate two steppers at the same time. Also computer control is not there yet, but something I want to implement in the future. But for now it works and I'm happy with it, although when I would do a project like this again I would not use the enclosure. It is too cramped and too heavy. The whole setup weighs a staggering 8 kg, so a sturdy stand is needed to keep it all up in the air. I also spend way too much on this project, but that comes with lots of learning experiences, so it was worth it in the end. 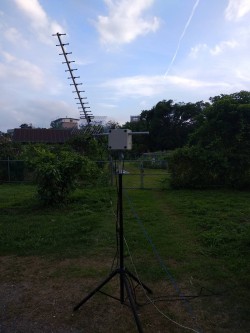 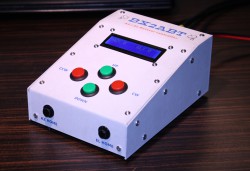 To see more images and videos of this project go here.

For the Arduino code go here.

And I put some code I used to test the various components here as it might be useful and as a reference for myself.

Made with Fritzing. All resistors are 1k. The electrolytic cap is 48 uF. The stepper drivers are two Trinamic TMC2208 units. 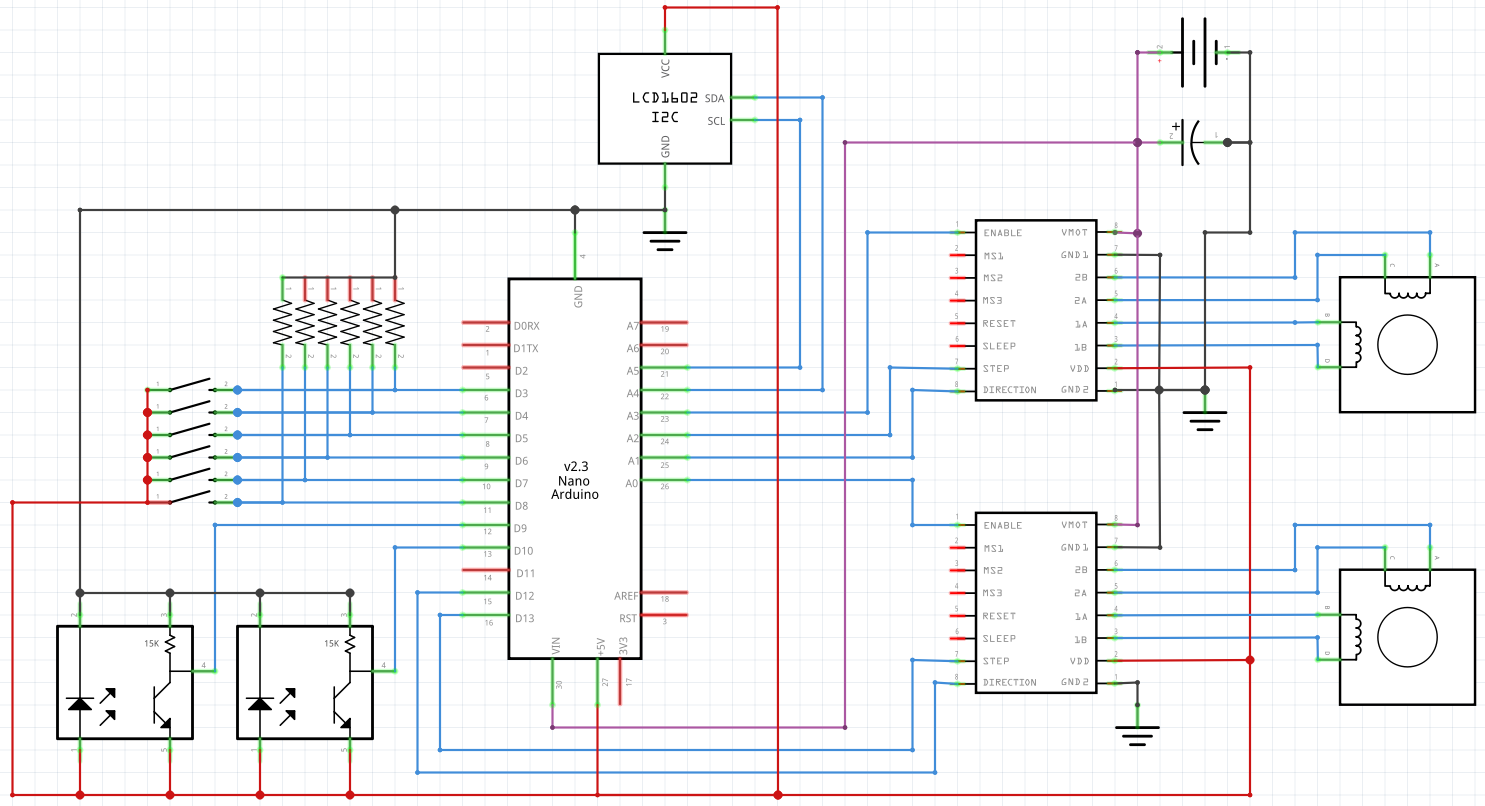 Notes on the parts used

The sprockets were especially made for me by a local business in the next town of Zhongli. The chain is type 25 and the big sprockets are 25x32 with a 25mm bore, the smaller ones 25x10 with a 6mm bore.

These were the trickiest parts to get. It was impossible to get 25.0mm tubing of any kind (aluminium, stainless, fiberglass), so in the end I got two 60 cm pieces of 1" alu-tubing with an 8mm inner diameter and 25.4mm outer diameter. With the help of BX2AB I found a metal workshop where they could be machined down to 25.0mm. The added cost of that was a staggering NT$500 per piece (US$16.50). Luckily I didn't have that much money on me when I collected them and the owner was in a good mood, so I emptied my wallet and only payed NT$600 for both of them (US$20).

This was also a major purchase. Bought from Nonstone in Tainan for NT$1368 or US$45.60. Product number is FT202015, which means a 20x20x15cm IP66 outdoor enclosure. Very heavy, because it is all thick steel and in Taiwanese fashion not 100% perfectly made. They don't have any stock of these enclosures, so it took a three week wait before I got mine deliverer by courier.

I started off with the ubiquitous TB-6600 driver, which is a bit overkill for a NEMA-17 stepper motor. The quality is also dependable on the build and I had one that became very noisy within a few weeks. I then tried another ubiquitous driver, the A4988, which worked, but was also very noisy. The TMC2209 drivers were next, but because of my own doing I managed to fry them. I searched for a cheaper solution and got a good deal on the somewhat older TMC2208. They lack some features of the TMC2209, but I don't need these anyway. They are a tad noisier, too, but still well below the noise level of the A4988.

If the cable between these sensors and the Arduino is long the line will become noisy. The solution is to simply put a capacitor (like a 0.1uF) over the signal line and ground.